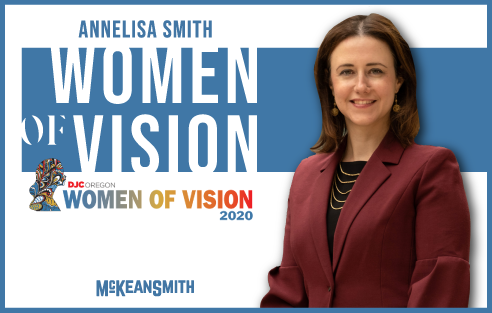 The Daily Journal of Commerce has announced its Women of Vision award winners for 2020, and McKean Smith’s co-owning attorney Annelisa Smith has made the list! The awards honor women who strive to shape the communities of Oregon and Southwest Washington through their leadership, mentoring efforts, community involvement, and promotion of industry diversity.

Annelisa’s efforts extend beyond her own practice with comprehensive, hands-on attorney mentoring to attorneys both in her own firm and also in the broader Oregon legal community. She serves on the board of several legal committees, including acting President of the Oregon Academy of Family Law Practitioners, Chair-Elect of the OSB Family Law Section and she previously served on the Family Court Enhancement Project Committee and acted as conference chair for the annual OSB Family Law Conference. These organizations and activities all strive to improve the quality of legal representation and professionalism in Oregon. With her background as a juvenile public defender representing parents and children in child abuse and neglect cases, Annelisa also serves the community by participating as a Director on non-profit boards like Allies In Change and as one of the founding directors of BRAVO Youth Orchestras.

The Daily Journal of Commerce has announced its Women of […]

McKean Smith is excited to have 5 of our attorneys […]

The New Normal: Distance Learning and Updating Your Parenting Plan

Updating Your Parenting Plan to Address Distance Learning By Attorney […]

McKean Smith is excited to announce that established attorney, Ronald […]